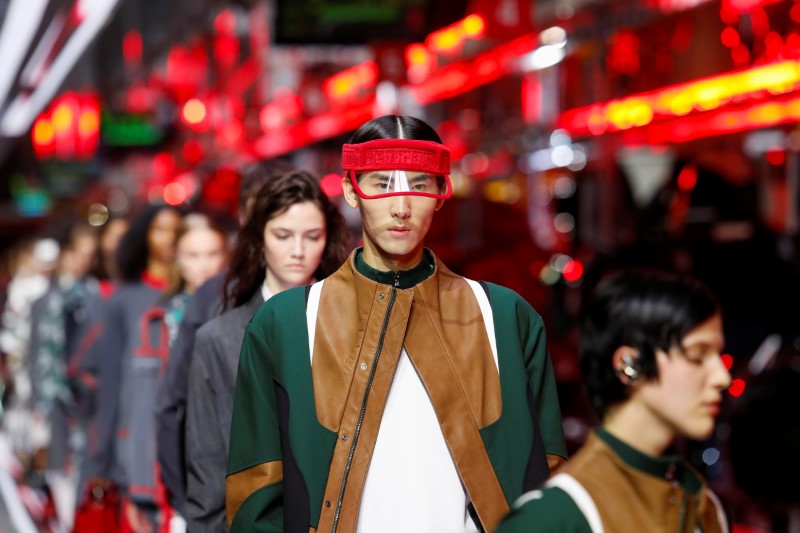 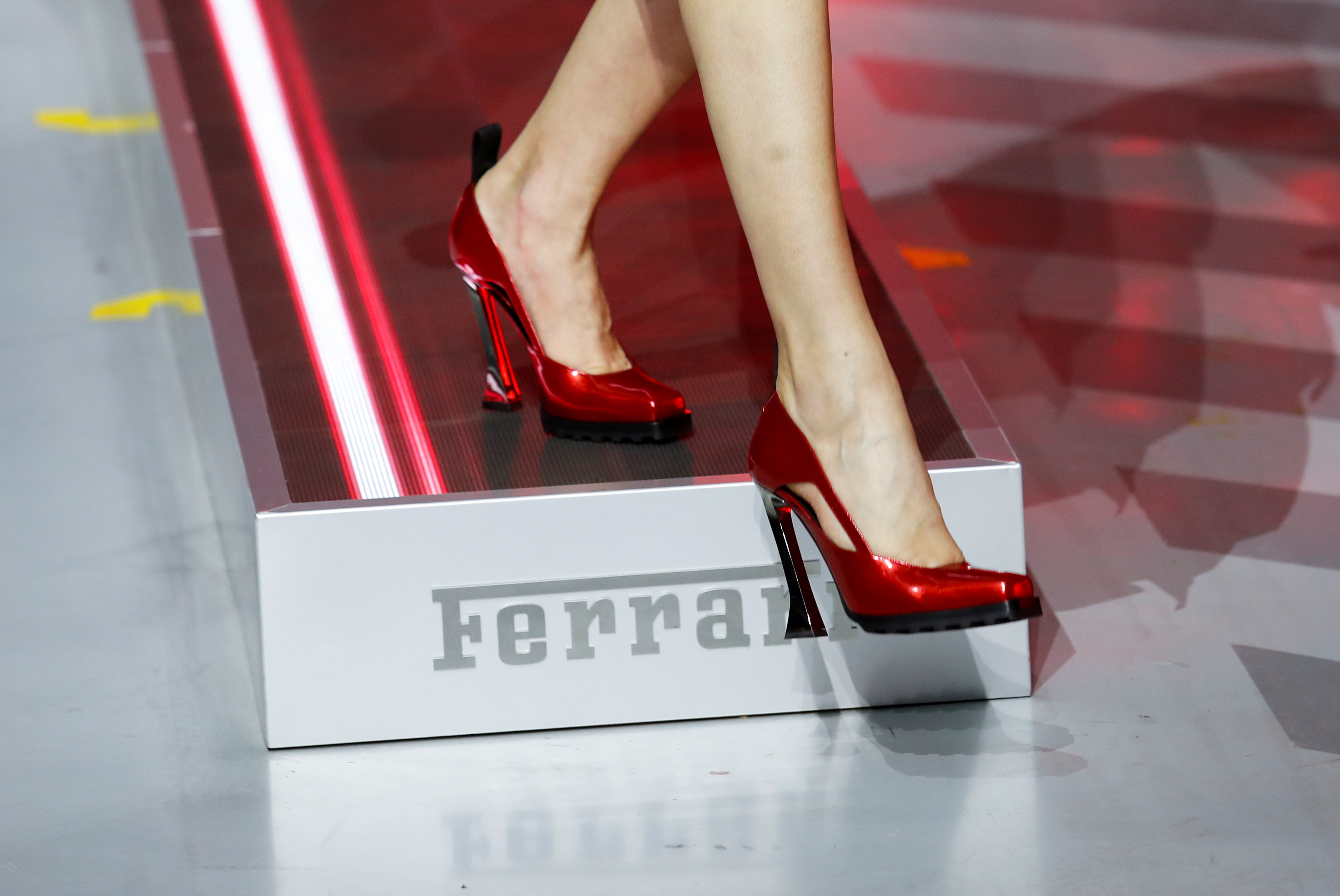 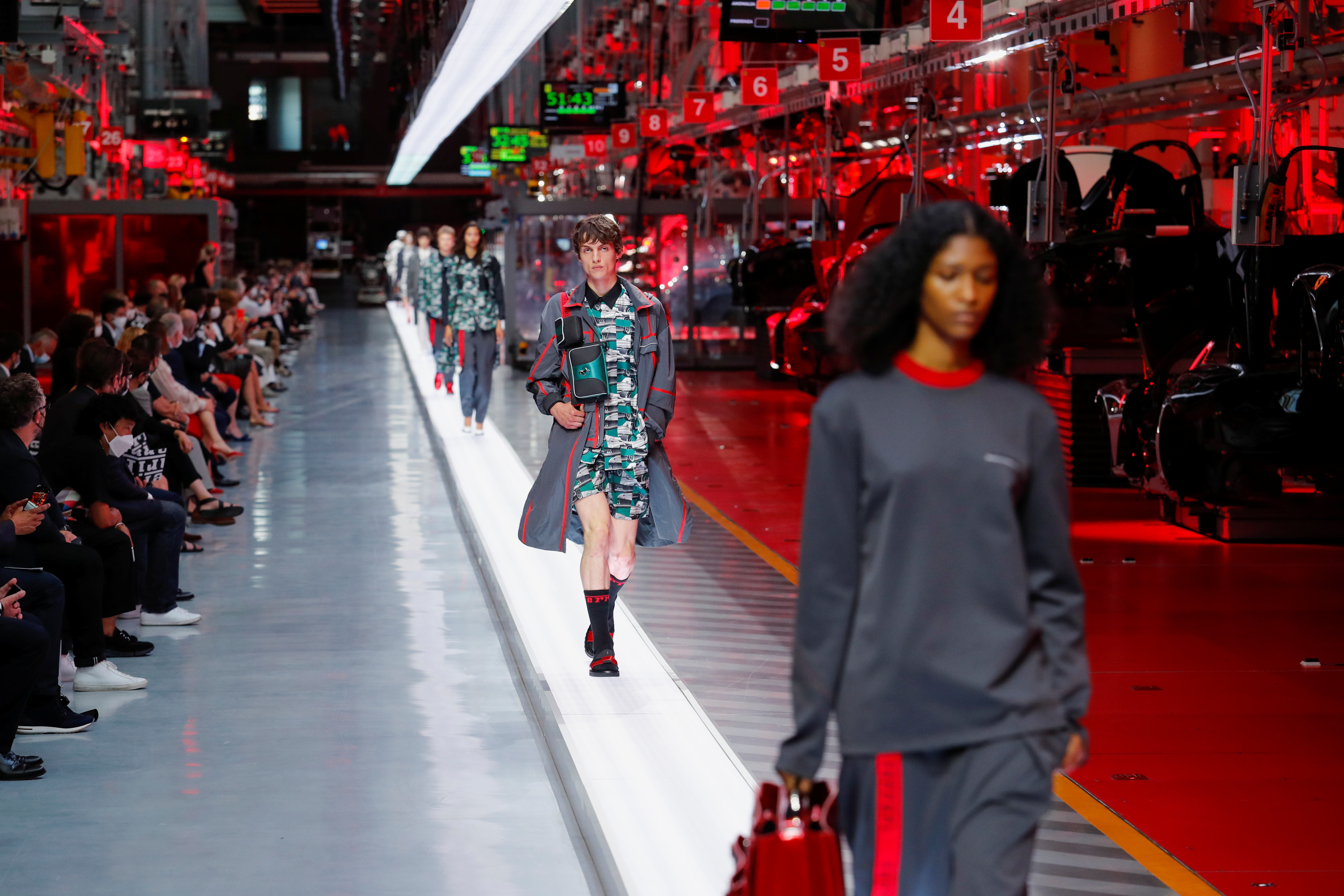 Shoes are seen in detail as a model presents an outfit from luxury carmaker Ferrari's first internally-designed fashion collection for women and men as the first step of its rebooted brand extension strategy, in Maranello, Italy, June 13, 2021. REUTERS/Remo Casilli

Ferrari (RACE.MI) on Sunday rolled out its first in-house fashion collection, offering fans of the Ferrari brand and its supercars a touch of "couture" within a contemporary clothing range.

The launch marks a major step in Ferrari's new brand strategy, one of its biggest investments outside the car business, which the company wants to account for around 10% of the profits in 7-10 years. read more

The fashions, by creative director and former Armani designer Rocco Iannone, were on show at the Ferrari plant in Maranello, with a catwalk set up on the assembly line for the "Prancing Horse" V12 sports cars, such as the new 812 Competizione.

"We want to attract young people and women," Iannone said.

"Our targets are not just those who buy a Ferrari but also those who have awareness of the brand and of its values," he said.

Iannone, 37, a native of Calabria in the south of Italy, said he worked hard on fabrics, which include silk, with a printed pattern of Ferrari iconography, and nylon.

"Most of them are high performance technical fabrics but with a haute-couture touch," he said.

Iannone described the collection as "fluid", with 80% of the fashions designed to appeal to both women and men, with sizes spanning XXXS to XXXL.

"Ferrari is never a nostalgic company, it's always ready to seize the spirit of present and to look at the future," he said.

Ferrari, however, will not forget its Formula One supporters even though it is cutting back on licence-based merchandising by 50%. The company will still sell hats, cups and t-shirts beloved by fans.

Ferrari's fashion collection will be on offer mainly online and through the company's official stores in Maranello, Milan and Rome, while further store openings are scheduled in Los Angeles and Miami this year and in China in 2022.

Boari said Ferrari's luxury collection would be later expanded to include accessories. "It will be an important area of development."

The collection comes just days after Ferrari appointed as new CEO Benedetto Vigna, a physicist who has spent 26 years in the semiconductor industry and is expected to drive Ferrari into the electric car era. read more

"Nothing changes in our band strategy, the aim is to reach a wider public, especially young people and women, which is instrumental to our core-business," Boari said.