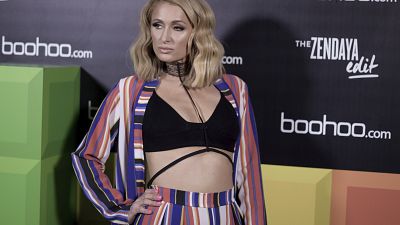 Boohoo has a major market in the US, often pairing with high profile celebrities such as Zendaya to promote the brand. Pictured: Socialite Paris HIlton at a Boohoo event.   -   Copyright  Richard Shotwell/2018 Invision/AP Photo
By Maeve Campbell  •  Updated: 02/03/2021

Fast fashion giant Boohoo may be banned from exporting goods to the United States amid continued accusations that the company is using slave labour.

A campaign has been launched calling for a deeper investigation into Boohoo’s business practices and engagement with modern slavery. These claims are now being considered by US Customs and Border Protection (CBP).

The news follows the company’s recent announcement that it is buying British retailer Debenhams for £55m, as well as Arcadia brands Burton, Dorothy Perkins and Wallis.

In July 2020, Boohoo was accused of modern slavery after it emerged that garment workers at factories in Leicester, UK, were being paid far below minimum wage. The Sunday Times report also found that work was taking place in unsafe conditions.

Despite the company saying it was “shocked and appalled” by the claims, the allegations have not died down, as a recent petition is triggering the conversation once again.

Human trafficking prevention organisation ‘Liberty Shared’ is leading a petition to look into the UK’s apparel industry. Run by Duncan Jepson, it urges the US authorities to prohibit imports of Boohoo goods into the country.

The CBP believes it has grounds to launch an investigation into the alleged malpractice, reports Sky News today.

"The evidence of Boohoo and forced labour is quite compelling,” Jepson tells Sky.

"I think it will be a wake-up call for British institutions about how they're handling modern slavery enforced labour, particularly in a community like Leicester East.”

This morning Boohoo's share price tumbled following the reports, falling five per cent in early trading before marginally recovering to four per cent by lunchtime.

How has Boohoo responded?

Based in the British city of Manchester, Boohoo has 14 million online customers and is many consider it to be the country’s fastest growing fashion retailer.

However, the company’s sales in 2020 were £263.6 million in the US alone, which accounts for more than a fifth of its total revenue. If the import ban comes into effect, it is likely to adversely affect the future of the business.

In response to the news, Boohoo has stated that it is not aware of any investigation taking place by the US authorities and would continue to fulfil orders for US customers, according to the Press Association (PA).

It told the PA that, “over the past eight months the group has been working closely with UK enforcement bodies” and it would “work with any competent authority to provide assurance that products from its supply chain meet the required standard.”