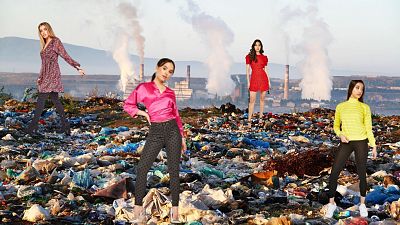 Touted as a sustainable and crucially, cheaper, alternative to high-street fashion - Everything5pounds claims to be recycling deadstock (the unsold stock of big brands) to sell to UK consumers for unbelievably low prices.

The company says they’re stopping deadstock going to landfill and are pushing for a more circular economy. The UK is the fourth largest producer of textile waste in Europe, each Briton throws away about 3.1kg of textiles every year, and that 1.7kg of fashion waste is landfilled yearly per person.

Our clothing industry is the third largest in Europe, and as consumers we spend around £980,500 a year on new clothes.

But could a business that relies entirely on overproduction to turn a profit, ever be truly committed to changing the system?

In fashion “deadstock” refers to the seasonal clothing lines that aren’t going to be sold in shops anymore. There is nothing actually wrong with this clothing - only that it is “out of fashion” and with four seasons a year, brands accumulate deadstock very quickly.

Often, stores will have stockrooms piled high from last season’s collections and this clothing is sent to landfill or shipped to countries to be sold in lower price budget stores.

“Selling garments for £5 wouldn’t be a profitable sales model if brands were shouldering the losses,” says sustainability activist Aja Barber.

“So I'd want to know who it is that’s taking that loss, as it’s likely going to be garment workers. If there is really this much deadstock floating about being sold for such low prices month on month then there is something fundamentally wrong with the system.”

The effect that overproducing clothing has on our planet cannot be overstated.

Deadstock is an issue that many brands face. Ordering more stock than needed can be a simple miscalculation, but the effect that overproducing clothing has on our planet cannot be overstated.

The production of virgin polyester globally has doubled since 2000. The process is now generating 700 million tonnes of CO2e every year – which is as much as 180 coal-fired power plants. The report forecasts that emissions from the sector could double by 2030. It considers strong and continued growth in the fast fashion sector and an uptick of polyester use for textiles in the home, compounded by the influence of the fossil fuel sector.

But it’s also people who suffer from mass overproduction.

In garment factories across the world, demands are placed on factories to produce more, for less, which means increased targets on poorly paid workers who are only paid per garment they make. This fuels a culture of overproduction and leaves us with huge piles of unsold and unworn clothes simply going from factory floor to landfill, often back to the same countries they started life in.

Greenwashing the problem away

Everything5pounds is pushing a message of sustainability, but their website makes no mention of circular economies, deadstock or even sustainable fashion.

They’ve been trading since 2010, and they’ve never marketed themselves as a “green” alternative to fast fashion until now. There’s clearly no efforts to educate their customers on what deadstock is, or why the overproduction of garments is such a huge issue for the environment.

“We did a slow shopping guide in the summer about made to order - ensuring we never make a single thing that goes to waste,” says London sustainable clothing brand Birdsong. Recycling deadstock is just a small part of plugging the ever-growing gap of overproduction.

Because of our production model, people appreciate and treasure their items more.

“We never have over-stock, as people have to be really sure that they want their garment and are willing to wait a couple of weeks for it. But the feedback from customers has been that because of our production model, people appreciate and treasure their items more. Selling "deadstock" that's the result of someone else's overproduction, unless it was made decades ago, is a very tenuous way to claim sustainability.”

But fast fashion brands are feeling the heat, and they’re looking for ways to boost their sustainability credentials to appeal to a new more eco-conscious market.

Like many industries, fashion has found a simple way to deal with its waste without needing to tackle the root cause.


The product of a broken industry

Encouraging consumers to buy more for less is unsustainable. Garment workers are often paid for each garment they make, rather than receiving a salary. Brands crank up targets every month, encouraging workers to over-produce as much clothing as possible for less and less money.

Although Everything5pounds is putting these clothes back into the circular economy, selling cheap clothing made with fossil fuel intensive materials for £5 is giving brands an excuse to keep over producing. The problem is, consumers are more likely to bin cheap clothing if they think it was always destined for landfill.

Consumers are more likely to bin cheap clothing if they think it was always destined for landfill.

Deadstock may be marketed as “leftovers”, but really, it’s just another pile of available stock to be sold. One could argue brands could be tempted to even overproduce clothing to maintain the monopoly of garment factories producing each item as cheaply as possible, to later sell as “deadstock” to companies just like Everything5pounds.

This isn’t an accident, it’s a calculated part of a broken system.

Deadstock isn’t a serendipitous low cost alternative to high-street shopping, it’s a symptom of a bloated garment industry, where as always - it’s workers and the planet who are paying the true price.

Whether they know it or not, Everything5pounds is just another outlet to greenwash the industry.