Tokyo-based designer Ryunosuke Okazaki has created a collection of couture dresses in bold colours and shapes that are informed by Japanese Jōmon-era pottery and the Shinto religion.

For his graduate project from the Tokyo University of the Arts, Okazaki released a lookbook that showcases a trio of couture dresses titled JomonJomon that reference Jōmon-era pottery and Shinto, an ancient religion that originated in Japan.

The elaborate designs especially nod to Jōmon-era pottery, where vessels were decorated through pressing rope and coils into wet clay to create ornate designs. The Jōmon era is believed to have dated between 10,500 BCE to 300 BCE.

"The decoration and modelling of Jōmon pottery are designed for the wishes for life," Okazaki told Dezeen.

"The collection is created with the wishes for life in the present days, inspired by the decorations and sculptures that continued from the Jōmon period to modern Shinto."

The JomonJomon collection was made using polyester, cotton and ribbed knits, adopting red, blue, black and white as the primary colours.

Its sculptural forms were created by combining and draping textiles that are contoured into geometric patterns and shapes. 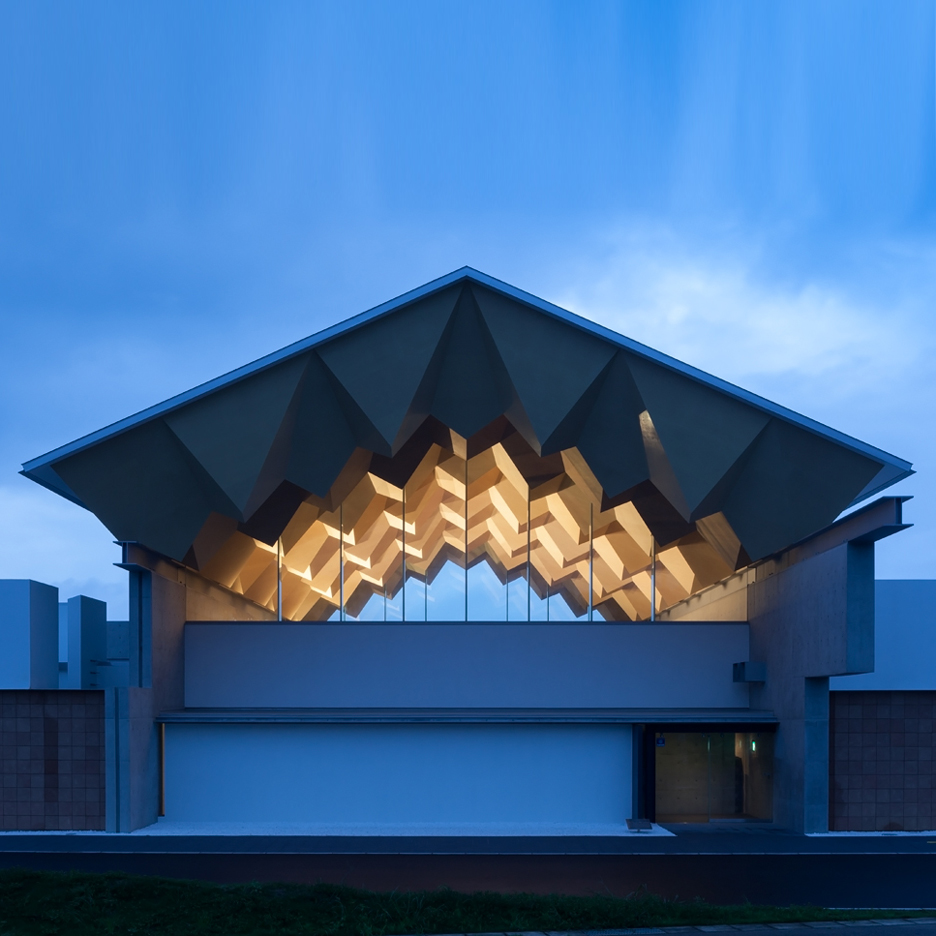 Bold colours paired with contrasting stripes and swatches were used to accentuate the curves and contours of the sculptural fabric.

"I tried to make it pop and colourful while using modern materials, to express the modelling of Jōmon pottery and Shinto, which is earthy, in a modern way," explained the designer.

The designer drew parallels between the Jōmon era and the current period of living through a pandemic.

"COVID-19, which is currently prevalent all over the world, made us conscious about 'death' in a closer way than ever before," the designer explained.

Jōmon pottery was used to channel hopes for life and fears of death, a concept that the designer reimagined for his collection.

The collection aims to let people feel the existence of god, Okazaki explained, with the lookbook depicting models wearing the garments on plinths as a reference to the way in which people worship.

Other innovative couture projects include Iris Van Herpen's couture dress constructed using fabric made from ocean plastic, while Phillip Lim teamed up with industrial designer Charlotte McCurdy to create a couture dress made out of algae bioplastic fronds.

Photography is by Kenji Agata.