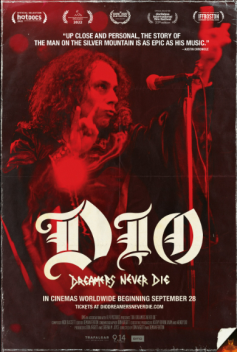 In addition to the feature-length film, this special cinema event will also include a hand-picked selection of outtakes from the cutting room floor that will only be shown at these screenings to create an exclusive experience for fans in attendance.

Ronnie James Dio, who died of gastric cancer in 2010, reigns as one of the most influential rock artists of all time and one of the greatest vocalists ever. With an illustrious recording career spanning from the 1950’s through to the 2000’s, the documentary follows his trajectory from sideman into singer, songwriter and frontman of not one, but three, of rock’s internationally-renowned, multi-Platinum-selling arena attractions: Rainbow, Black Sabbath and DIO. Famous for popularizing the “devil horns” hand gesture that is now synonymous with hard rock and heavy metal music, Dio was known for not wavering in his pursuit of his rock and roll dreams and continues to influence a new generation of music artists.  His fans the world over remember him not only for his massive talent, but for his kindness, resulting in millions of dollars raised for cancer research in his memory.

Rhino/WMG will release the soundtrack from “DIO: Dreamers Never Die” in the fall.

More information about Trafalgar Releasing can be found at www.trafalgar-releasing.com.

ABOUT BMG
BMG – est. 2008 – is the world’s fourth-biggest music company, the first new global player in the music business of the streaming age, and a record label and music publisher in one. Named in 2020 one of the world’s Most Innovative Companies by Fast Company, BMG’s pitch is unique – a relentless focus on fairness and transparency and service to its artist and songwriter clients. BMG’s 19 offices across 12 core music markets now represent over three million songs and recordings, including many of the most renowned and successful catalogs in popular music history. BMG’s fresh approach includes production music, films, books, artist management, merchandise, neighboring rights, and live as well as music publishing and recordings off the same service platform. BMG is owned by international media, services and education company Bertelsmann, whose other content businesses include the entertainment company RTL Group and the trade book publisher Penguin Random House. With its multi-platform perspective, integrated technology platform and commitment to help artists maximize their income, BMG aims to be the best company in music to do business with. www.bmg.com