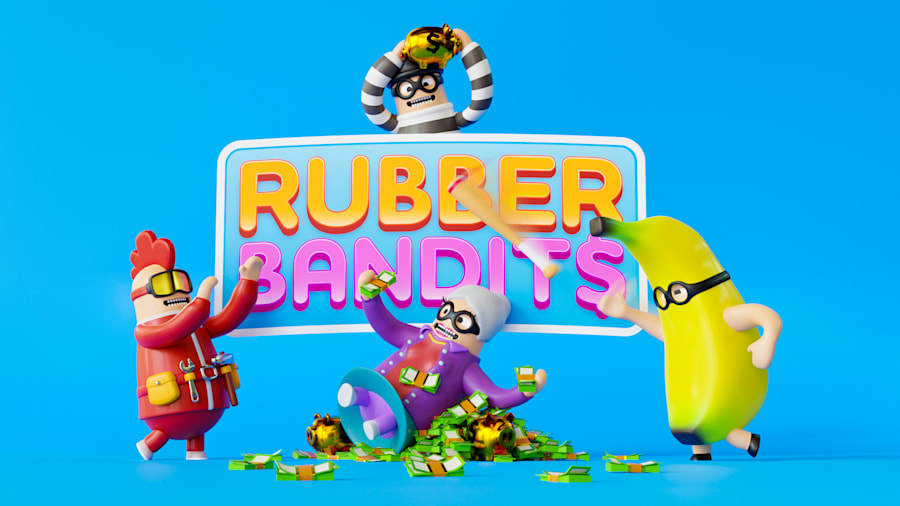 Steal, brawl, and dash to the finish line with the most loot to win!

Copenhagen, Denmark | 19th January 2023 - Rubber Bandits, a wild family-friendly party brawler for 1-4 players, is launching on Nintendo Switch on the 19th of January, with online and local multiplayer options (but you can play single-player, too)! “We are super excited to see Rubber Bandits on Switch. Even when working on the early prototypes years ago, we were talking about how great a match Nintendo Switch is for a game like this!” - Mikkel Thorsted (game director).

'This game has ended my friendships' - Aether

'...an instantly accessible party game with a bunch of fun game modes (particularly Heist) and presentation that shows alot of charm…can run on a toaster, and is Steam Deck compatible as well. Wonderful stuff!' - LouieBee

'This game perfectly matches my level of intelligence' - Johnny [HUN]

up other players and cops to bombing everyone around you. The game modes are

enhanced with modifiers like Speed Boosted, Bomb Rain and Fastball Throws so there

are tons of ways to go about winning the round.

In Rubber Bandits, pretty much anything you find in the game can be used as a

flamethrowers. In addition, the bandit can be stylized however a player wants in order to

regardless of whether they play on Switch, Xbox, Playstation, or PC. The game already

has a playerbase of more than 600.000 players ready to welcome Switch players with

Since launch, Rubber Bandits has evolved with new game modes and major

updates, as well as regular seasonal updates and events, such as Halloween, Winter

Holidays, Lunar New Year and others.