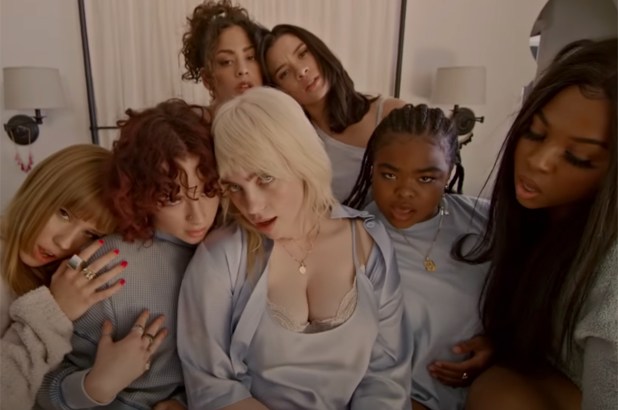 Billie Eilish has a sexy slumber party with her friends in the new music video for "Lost Cause." YouTube

Not even Billie Eilish can resist the siren call of Skims.

On Wednesday, the 19-year-old pop superstar dropped her new music video for “Lost Cause,” which sees Eilish and her pals enjoying an epic slumber party while clad in color-coordinated loungewear in shades of beige, brown, black and pale blue.

“We had the time of our lives being hot & shooting this,” Eilish shared on Instagram.

The Grammy winner spends much of the self-directed clip wearing the Boyfriend T-Shirt ($42) and Boyfriend Boxer ($26) from Kim Kardashian’s shapewear and leisure label.

Some of Eilish’s gal pals are also outfitted in Skims in the video, with the Cozy Knit Short ($58), Stretch Rib High Neck Bra ($42) and Stretch Rib Short ($34) all making cameos.

Kardashian, 40, seemed thrilled to get the singer’s stamp of approval, and posted a screengrab of the music video on her Instagram Stories, writing, “I spy SKIMS.”

Eilish then reposted the shoutout on her own Stories, adding a heart-face emoji.

In “Lost Cause,” the star balances her signature slouchy, oversized style with the lingerie-inspired look she debuted in her British Vogue cover story last month; in addition to baggy tees and sweatshirts, she’s seen in a silky, low-cut powder blue pajama set as well as an olive green cardigan teamed with black lace panties.

And sexier styles aren’t the only way Eilish is switching up her look ahead of the July release of her second studio album, “Happier Than Ever” — in March, she ditched her green-and-black hair in favor of a pinup-inspired platinum blond dye job.