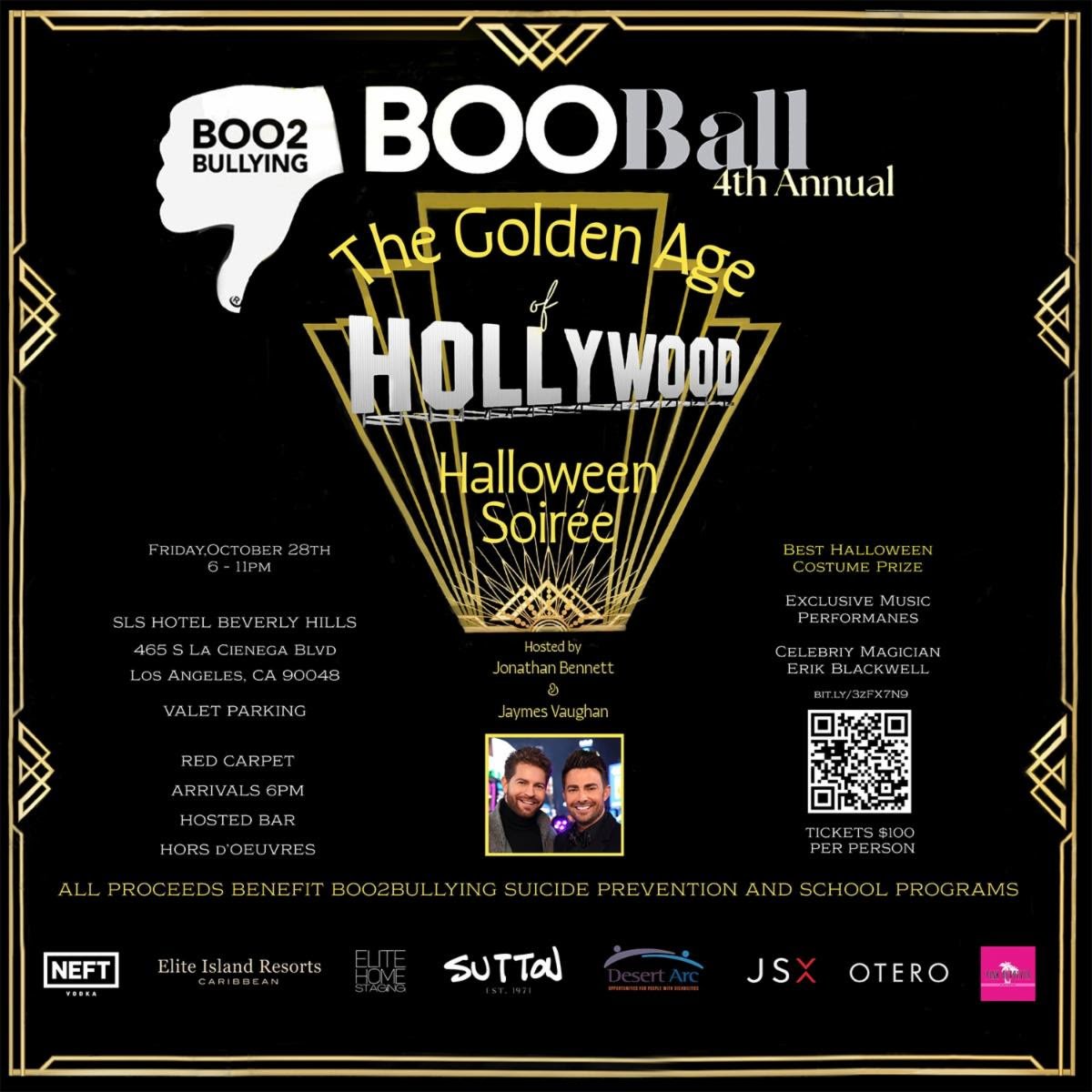 Boo2Bullying is excited to announce its 4th Annual BOO BALL slated to take place this Friday, October 28th from 6PM-11PM at SLS Hotel Beverly Hills. With a mission to eradicate bullying, intolerance, and discrimination, Boo2Bullying works to educate kids, schools and parents about acceptance, diversity, and inclusion. The Halloween gala will celebrate classic Hollywood, The Golden Age, as an era of cultural excellence, and aim to empower today’s youth to speak their truth and stand up against bullying.

The 4th Annual BOO BALL, having relocated from Palm Springs, will benefit Boo2Bullying, the locally-based nonprofit organization founded by Dimitri Halkidis. This must-attend Halloween soiree will feature celebrity guests, a headlining performance by Justin Jesso, known for his song Stargazing with Kygo which has over 500 million streams on Spotify a performance by magician Erik Blackwell and surprise musical acts by Katie Welch, Louis Knight (American Idol season 18 and 19), Jamie Miller featured on The Voice UK, plus dancing, bespoke libations, costume prizes, ghoulish décor, Halloween treats, cuisine and more. The red carpet event will be hosted by actors Jonathan Bennett and Jaymes Vaughn, with many notable talent attendees to be announced. The 2022 event theme, The Golden Age of Hollywood, was the period in the American film industry from the mid-1920s to the early 1960s when Hollywood studios produced the highest number of cinematic and artistic masterpieces. The stars wore furs and fine jewels, the films followed fresh storylines, and the streets of Hollywood were sparkling with class.

Proceeds from the event will underwrite anti-bullying programs in schools and on major social media platforms. Boo2Bullying’s youth empowerment initiatives and video content provide outreach, mentoring, inspiration and support for bullied youth and their families. The organization strives to give children and teens the tools to foster a healthy self-image, learn to accept diversity, speak their truth, and positively impact those around them.

Cassie Scerbo is best known for her acting resume having already led various television series and films including BRING IT ON: IN IT TO WIN IT, ABC Family’s “Make it or Break it,” the “Sharknado” film series, Syfy’s “Truth or Dare” and ABC’s “Grand Hotel” but most importantly, Cassie is an advocate against bullying! First joining as a girl’s youth ambassador almost 15 years ago, Cassie has risen to be the Vice President of Boo2Bullying, a nonprofit seeking to eradicate bullying, intolerance and discrimination by educating schools and parents about accepting diversity and giving young people the tools to connect with and positively impact those around them. In addition to speaking on panels against bullying, Cassie regularly holds fundraisers to raise money for their school programs and suicide prevention outreach.

As a former student of Stoneman Douglas High School in Parkland, FL who was deeply affected by the tragic school shooting, Cassie helped produce the newly-released documentary Code Red: Youth of the Nation currently available to watch on Amazon Prime Video, Apple TV, Google Play, YouTube, etc. From the most influential young voices of America, Code Red: Youth of the Nation searches and finds the answers of how we can protect our most vulnerable from the great4est threats of their generation. From COVID-19 and mental health, education policy and school safety, Code Red uses the deadliest high school massacre in American history at Marjorie Stoneman Douglas High School in Parkland, Florida as a vehicle to experientially illustrat4e and engage through the testimonies of the FBI, students, teachers, law-enforcement and SWAT commanders, teachers, psychologists and education experts of how we, as parents, teachers and students, have the ability to act and avoid a #generationlost.

Born on the east coast in Long Island with a large traditional Italian family, and later moving to Parkland, FL, Cassie began taking her first dance lessons at the young age of four and immediately knew she wanted to be a performer. By age 10, Cassie had an agent in South Florida and had booked extra work in a Burger King commercial. She then went on to split time between Los Angeles and Florida while pursuing her dream. As a teenager, Cassie was signed to Geffen Records and DIC Entertainment as one of five girls chosen by veteran music producer/executive Ron Fair for the girl group Slumber Party Girls (SPG), who began appearing on the Saturday morning series “Dance Revolution.” From there, Cassie continued to hone her skills as an actor and landed the role as one of the leads in BRING IT ON: IN IT TO WIN IT in which she starred opposite Ashley Benson, ABC Family/Freeform’s hit gymnastic series “Make It or Break It,” the Syfy SHARKNADO film series, and ABC’s “Grand Hotel, to name a few.” In her free time, Cassie can be found at her local boxing gym, travelling, cooking or finding any reason to go to South Florida to visit her family.