BOCUSE D'OR ASIA-PACIFIC: DISCOVER THE FIVE COUNTRIES TO TAKE OFF FOR THE GRAND FINAL IN LYON

The Selection Committee presided by Jérôme Bocuse met to decide wich countries in the Asia-Pacificregion would qualify for the Grand Final of the Bocuse d'Or, which will be held on 22nd and 23rd January 2023 during Sirha Lyon. Due to the sanitary conditions, this selection was exceptionally made by application. 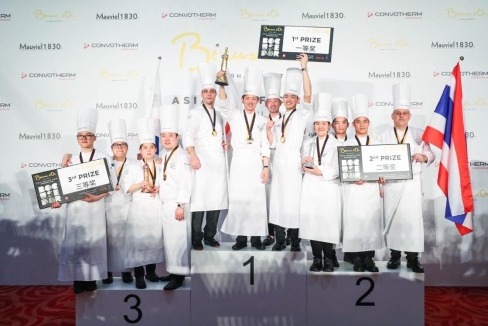 In order to have a chance to be selected to participate in the Grand Final, each team had to submit an application file consisting of a recipe project and a presentation of the team members (candidate, commis, coach, jury, etc.). 5 countries convinced the members of the Selection Committee composed of chefs, by alphabetical order:

5 TALENTED TEAMS JOIN THE WINNERS OF THE PREVIOUS 2022 SELECTIONSThese 5 teams join the already-selected ones during the Bocuse d'Or Europe, which took place in Budapest on 23rd and 24th March, and the Bocuse d'Or Americas, which was held on 14th July in Santiago, Chile. The next and final step in these 2022 continental selections is the Bocuse d'Or Africa, which will be held on 9th September in Dakhla, Morocco, during which we will discover the two teams from the African continent that will go to Sirha Lyon 2023.

As a reminder, here are the teams that qualified for the different continental selections.